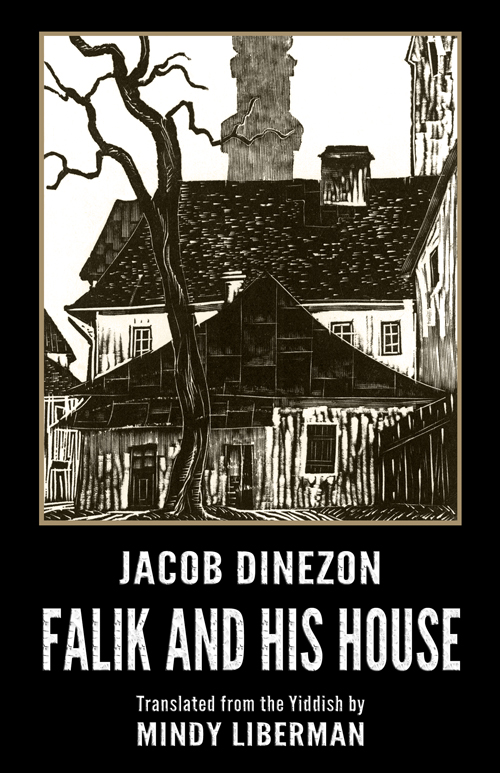 Falik the Tailor has fallen on hard times. His house, which he talks to like a brother, was once young and sturdy. Now in old age, it leans precariously, and the roof is leaking so badly it threatens to drown Falik, his wife, and their quarrelsome tenants.

To make matters worse, the richest man in town has purchased the property next door and is building a grand mansion that is blocking Falik’s light. Now, his greedy new neighbor has turned his eye on Falik’s house and has offered a significant sum to take it off his hands.

When Falik writes to his sons in America for financial help, they refuse and encourage him to take the rich man’s offer and come live with them in their new home.

What will Falik do? Sell and sail away to America or stay and save his beloved house by binding himself to the town’s unscrupulous loan shark?

Originally written in Yiddish in 1904 and translated for the first time into English by Mindy Liberman, Jacob Dinezon’s Falik and His House offers a masterful tale of one man’s stubborn determination to preserve his Jewish way of life in the Russian Empire at the turn of the twentieth century. A poignant, humorous, and life-affirming story of loyalty, love, and faith.

“Dinezon’s writing is poignant and haunting; his characters are bright, intense, and unforgettable. . . . Jacob Dinezon is truly a giant in Yiddish literature.”
—New York Journal of Books (Read Review)

Jacob Dinezon’s The Dark Young Man propels the reader back into the intriguing world of a 19th-century Jewish community in Eastern Europe, including a tragic love story, a thoroughly evil villain, and well-drawn supporting characters. Originally written in Yiddish, the book was a huge success after its publication in 1877, and with this new English translation, the novel should find its way onto the shelves of classic 19th-century literature.
—⁠⁠Deborah Kalb, author of Haunting Legacy and book blogger

Jacob Dinezon’s dramatic first novel was published in 1877 and quickly became a runaway bestseller. Considered the first realistic romance written in Yiddish, The Dark Young Man relates the efforts of a ruthless brother-in-law determined to protect his position of power by destroying the reputation of a beloved prospective bridegroom. Yiddish author I. L. Peretz wrote, “Never has such a righteous hatred flamed over all that’s bad and evil as over the Dark Young Man, who, with his intrigues, annihilated a family of blameless souls.”

Set in a suburb of the Russian city of Mohilev in the 1840s, Jacob Dinezon’s poignant tale delves deeply into the personalities and politics of Jewish middle-class society and describes in vivid detail the growing opposition to arranged marriages, the disparities between rich and poor, and the challenges of assimilation and modernity on traditional Jewish life.

A tale of suspense, betrayal, love, and death, Dinezon’s The Dark Young Man is a startling fictional account of mid-nineteenth century Jewish life, culture, and religion by a beloved author and masterful storyteller.

“A gripping tale with a realistic adolescent love story, a complicated plot, and an unexpected ending.”
—⁠⁠Association of Jewish Libraries Reviews

“A sweet, ageless romance . . . that has stood the test of time. . . . Peppler’s translation is lively, capturing the spirit of Dinezon’s fable. Beautiful, lyrical sentences tease the imagination, painting a vivid picture of the two lovers.”
—⁠Foreword Reviews (Read Review)

“A poignant look at the trials and triumphs of young love in the shtetl. Jacob Dinezon’s lyrical story brings this bygone world to life.”
—⁠Maggie Anton, author of Rashi’s Daughters and Rav Hisda’s Daughter

When Hershele, a poor but brilliant yeshiva student, is invited for a weekly charity meal by a rich widow, he comes face-to-face with Mirele, the widow’s pretty, bright, and strong-willed daughter. As the two innocently come to know each other, they fall in love.

Are they bashert—soul mates destined to be together? Or will rigid class differences, shtetl politics, and a ruthless marriage broker tear them apart?

This poignant love story, written in 1891, provides a vivid and insightful exploration of our great-grandparents’ lives in 19th century Eastern Europe: how they lived, how they loved, and how they tried to remain faithful to their Jewish way of life in the face of modern ideas and a changing world. 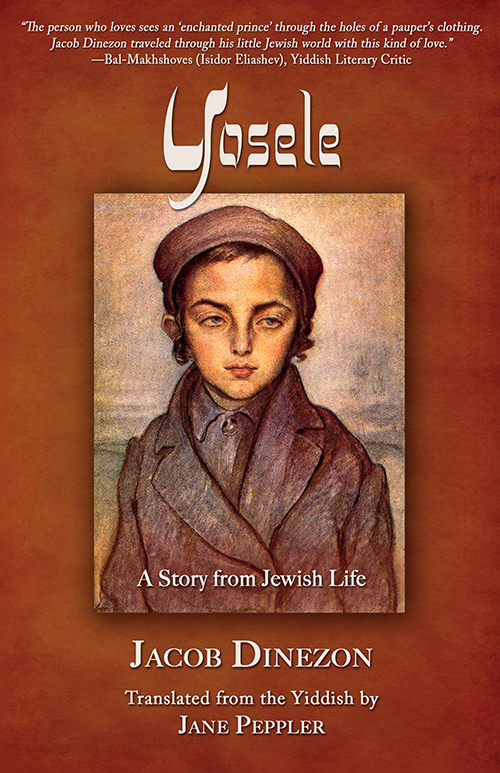 Writing in Yiddish to reach the broadest Jewish audience, Dinezon described with all the pathos of Charles Dickens, the sad, poverty-stricken life of a bright and gentle schoolboy whose violent treatment at the hands of his teacher, parents, and society is shocking and painfully heartrending. The outrage that resulted from the story’s initial publication produced an urgent call for reform and set the stage for the beginning of a secular school movement that transformed Jewish elementary education.

This first-time English translation by Jane Peppler presents a rare and vivid picture of Jewish life in Eastern Europe at the turn of the twentieth century. An excellent resource for classes in Jewish Studies, Yiddish literature, and Eastern European History. 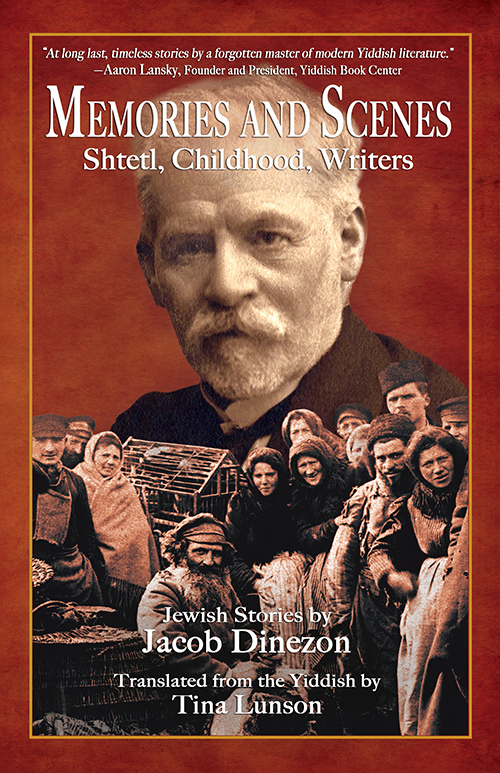 “With Dinezon’s Memories and Scenes, we happily encounter a master writer who deserves to be ranked with Sholom Aleichem and I. L. Peretz.”
—⁠⁠Hadassah Magazine

Jacob Dinezon (1851-1919) was one of the most successful Yiddish writers of the late 1800s. Friend and mentor to almost every major Jewish literary figure of his day, including Sholem Abramovitsh (Mendele Moykher Sforim), I. L. Peretz, Sholem Aleichem, S. An-ski, and Abraham Goldfaden, Dinezon played a central role in the development of Yiddish as a modern literary language.

A successful novelist in his own right, Jacob Dinezon, like Charles Dickens, championed the poor, the downtrodden, and the oppressed, especially children. He used his pen to expose the hypocrisy and injustice in shtetl society, and his stories reveal a deep love and commitment to uplifting and enlightening the common Jewish people.

In this collection of eleven autobiographical short stories, Dinezon recalls his childhood years in the shtetl, the unusual and memorable characters he encountered along the way, and the events that led to his passion for becoming a writer. Contained within these stories is a treasure trove of Yiddish history, culture, and values.

Now, for the first time in English, Yiddish translator Tina Lunson places Jacob Dinezon’s stories beside the works of his contemporaries. If, as scholars suggest, Sholem Abramovitsh, I. L. Peretz, and Sholem Aleichem, are the grandfather, father, and grandson of modern Yiddish literature, then surely Jacob Dinezon is the beloved uncle, writing stories filled with Jewish humor, compassion, and love. 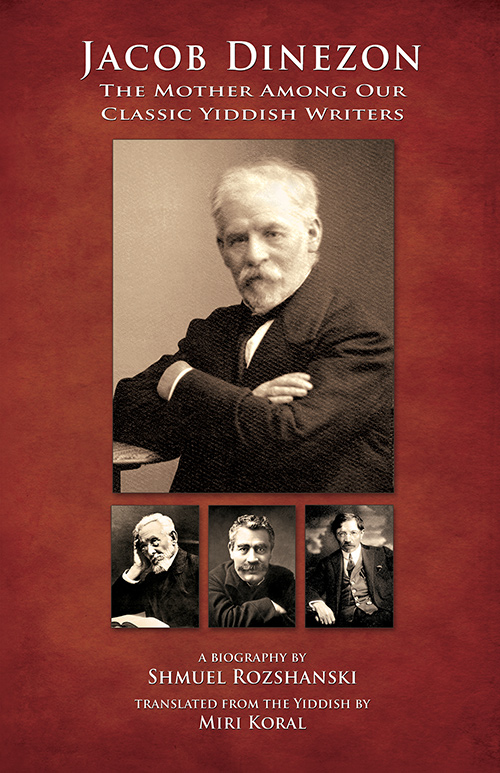 JACOB DINEZON
The Mother Among Our Classic Yiddish Writers

By Shmuel Rozshanski
Translated from the Yiddish by Miri Koral

An insightful and well-documented biography about the beloved and successful 19th century Yiddish author, Jacob Dinezon (1852?-1919), called by the Forward, “The Greatest Yiddish Writer You Never Heard Of.”

Credited with writing the first “Jewish Realistic Romance” and the first bestselling Yiddish novel, Dinezon was closely associated with the leading Jewish writers of his day, including Sholem Abramovitsh (Mendele Mocher Sforim), Sholem Aleichem, and I. L. Peretz—dubbed the “Classic Writers of Modern Yiddish Literature.”

Dinezon wrote poignant stories about Eastern European shtetl life and focused on the emotional conflicts affecting young people as the modern ideas of the Jewish Enlightenment challenged traditional religious practices and social norms. Frequently, the plight of his characters brought tears to the eyes of his devoted readers.

In this Yiddish biography written in 1956 and translated into English for the first time by Yiddishist Miri Koral, the renowned literary historian Shmuel Rozshanski makes the case for including Jacob Dinezon in the “family” of classic Yiddish writers. Based on his extensive research and review of Dinezon’s major works, Rozshanski concludes that Jacob Dinezon deserves to be recognized as a major figure in the development of Yiddish as a literary language. If, as scholars suggest, Sholem Abramovitsh is the grandfather, I. L. Peretz the father, and Sholem Aleichem the grandson of modern Yiddish literature, then Jacob Dinezon, Rozshanski insists, should be considered the “mother” for his gentle, kindhearted, and emotional approach to storytelling and to his readers.

An important research book for scholars of Yiddish literature, history, and culture.

Learn more about these and other books at jewishstorytellerpress.com.