Translated from the Yiddish by
Mindy Liberman

In this letter, handwritten in Yiddish, Jacob Dinezon writes to Sholem Aleichem on behalf of the committee established to purchase and return Sholem Aleichem’s copyrights to the author. 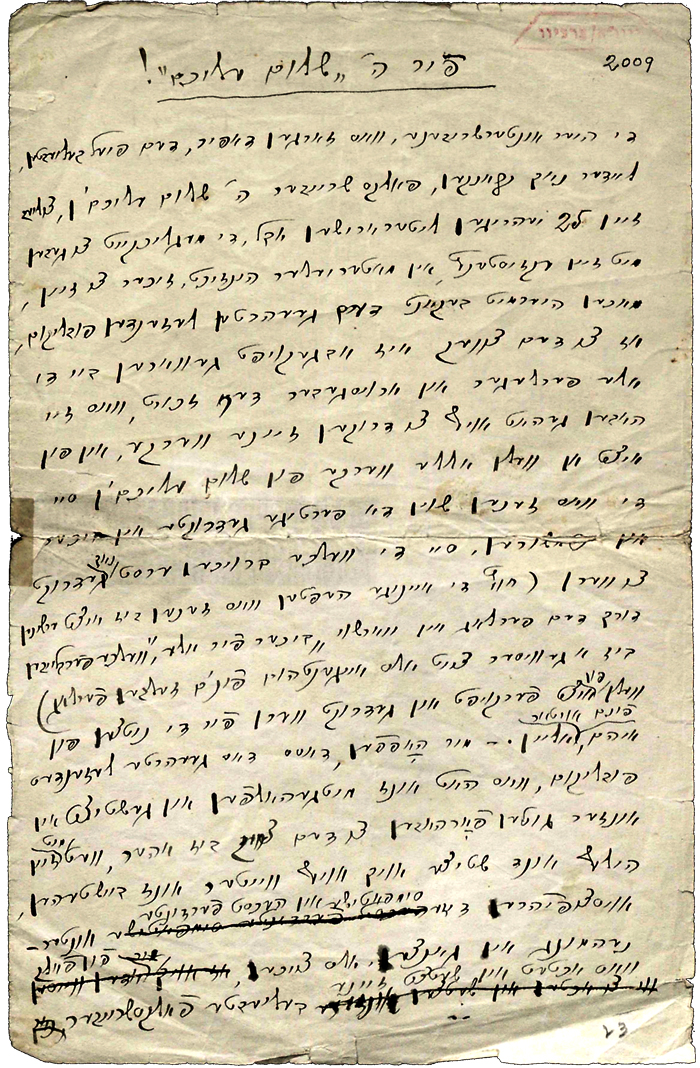 The undersigned here, who have unfortunately, for a long time, been concerned about giving to the much loved, people’s Mr. “Sholem Aleichem,” for his 25th Literary Jubilee, the possibility of securing his existence and material details, make known herewith to the esteemed reading public, that to this end the right which all of his publishers and presses had to print his works, have been bought back, and from now on all the works of Sholem Aleichem, both those that have already been published in books and brochures, and those which only now need to be published (except those few pamphlets which have until now appeared through the publisher in Warsaw “Bikher far ale” (Books for All) which remain for a certain time as property of the same publishing house) will be sold and printed from now on for the uses of himself, the author alone. We hope this, the esteemed reading public who collaborated with and supported us in our good preoccupation for the purpose until now, will with its help also continue to support us to carry out the agreeable and well-earned undertaking completely, as an indication by the people, who respect and esteem its beloved popular writer and talents according to their worth and earnings. From now on the only principal sale of all of Sholem Aleichem’s works for his own use is at Messrs. J. Lidski[1], Warsaw, Nalewki N. (?) 36

[1] Warsaw publisher and bookseller Jacob Lidski or Yakov Lidsky (1868-1921), the first publisher to sell back Sholem Aleichem’s copyrights in January 1909. Sholem Aleichem soon published a Jubilee edition of his works that was distributed by Lidski.
[2] Dr. Gershon Levin or Lewin (1868-1939), house surgeon for the Jewish hospital in Warsaw, writer, and community leader.
[3] Polish author, editor, and Zionist activist Abraham Podlishevsky or Podlishevski (1862-1929).
[4] Noach Prylucki (1882–1941) was an attorney and important Yiddish philologist, journalist, and publisher who helped establish the YIVO Institute for Jewish Research.