Translated from the Yiddish by
Mindy Liberman

This typewritten Yiddish letter from Sholem Aleichem to Jacob Dinezon describes the ongoing negotiations regarding the transfer of Sholem Aleichem’s copyrights in honor of his 25th Jubilee as a writer. 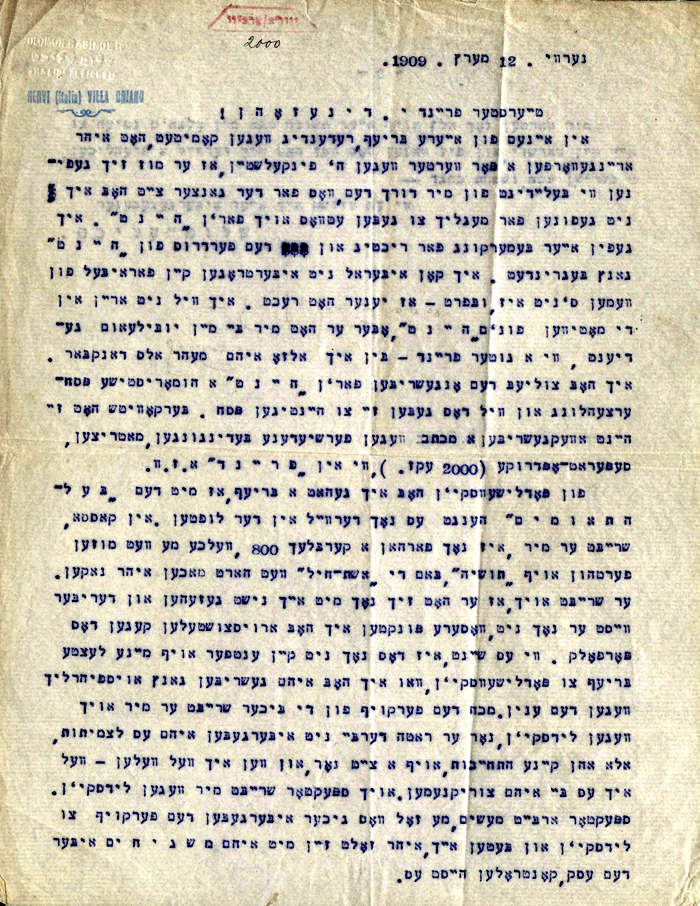 In one of your letters, speaking about the committee[1], you threw in a few words about Mr. Finkelshteyn[2], that he must find himself insulted by me, because for this whole time I haven’t found it possible to give something to Haynt as well. I find your remarks just, and Haynt’s annoyance altogether well-founded. I can’t endure resentment anywhere, from anyone, no matter whom, and especially—when the other person is right. I don’t want to go into Haynt’s motives, but he served me as a good friend during my Jubilee—therefore I am even more grateful to him. I have because of this written a humorous Passover story for Haynt, and will give it to them this Passover. Berkowitz[3] wrote them a letter today about various stipulations, typefaces, offprints (2000 copies) as in “Fraynd” and so on.

I had a letter from Podlichevsky[4], that with the “bal hatoymim”[5] it hangs meanwhile in mid-air. He writes me that there are still 800 rubles in the treasury, which we will have to invest in “Tushiah”[6] in case the “Woman of Valor”[7] will be stubborn. He also writes that he hasn’t met with you, and therefore doesn’t yet know what points to put forward to the couple. As it appears, there is as yet no answer to my most recent letters to Podlishevsky, where I wrote very exhaustively about the matter. Concerning the sale of the books, he also writes to me about Lidski[8], but at the same time he advises not to give it to him in perpetuity, but without any commitment, for a time only, and when I will want—I will take it back from him. Spektor[9] also writes me about Lidski. Spektor is doing everything possible so that the sale to Lidski will go through quickly, and asks you to act as mashgiachs[10] together in this matter, that is to supervise it.

We are still waiting for your response concerning my Olga’s trip to you in Warsaw, and in the meantime have a happy, kosher Passover, and You Shall Rejoice in Your Festival[11]—As your devoted Sholem-Aleichem wishes you

[1] Several of Sholem Aleichem’s literary friends and colleagues formed a committee to mark his 50th birthday and his 25th anniversary as a writer. Managed by Jacob Dinezon, the effort raised money to buy back Sholem Aleichem’s copyrights from the publishers to provide Sholem Aleichem and his family with financial security.
[2] Brothers Noyekh and Nekhemye Finkelshteyn were associate publishers of the Warsaw Yiddish language daily, Haynt. This incident probably refers to Sholem Aleichem having asked Dinezon to send the story “Shmuel Shmelkes” to the newspaper Der fraynd (The Friend) instead of having it published by the Jubilee Committee as originally planned. Sholem Aleichem agreed to wait for payment until later as Der fraynd was in financial difficulty. The editors of Haynt felt that this was unfair to their own paper as Noyekh Finkelshteyn had been very active on the Jubilee Committee.
[3] Yitshak Dov Berkowitz (1885–1967) was a Hebrew and Yiddish writer. He was also Sholem Aleichem’s son-in-law and assistant.
[4] Polish writer, editor, and Zionist activist Abraham Podlishevsky or Podlishevski (1862-1929).
[5] “The Twins.” Possibly refers to Magnus Krinski (Yakov Krinsky) and his wife. Krinski published a series of books titled Bikher far ale (Books for All) in 1905 in Warsaw. Krinski’s wife maintained that as soon as they bought Sholem Aleichem’s stories for the publication, they stopped selling. Therefore, there were no profits, and they didn’t owe Sholem Aleichem any royalties. They refused to provide accounting records.
[6] Tushiya Press. Their Yiddish arm Folksbildung issued Sholem Aleichem’s collected works in four volumes in 1903. They said they would only agree to sell back Sholem Aleichem’s copyrights if Krinski did the same.
[7] Sarcastic reference to the wife of Magnus Krinski.
[8] Warsaw publisher and bookseller Jacob Lidski or Yakov Lidsky (1868-1921), the first publisher to sell back Sholem Aleichem’s copyrights in January 1909. Sholem Aleichem soon published a Jubilee edition of his works that was distributed by Lidski.
[9] Writer and editor Mordkhe Spektor or Mordecai Spector (1858–1925).
[10] A supervisor authorized to inspect meat stores, bakeries, public kitchens, and commissaries to ensure adherence to orthodox Jewish ritual cleanliness or Kashrut.
[11] Vesamachta bechagecha (Hebrew)—“And you shall rejoice in your Festival . . . . and you will be only happy.” (Deuteronomy 16:14, 15).