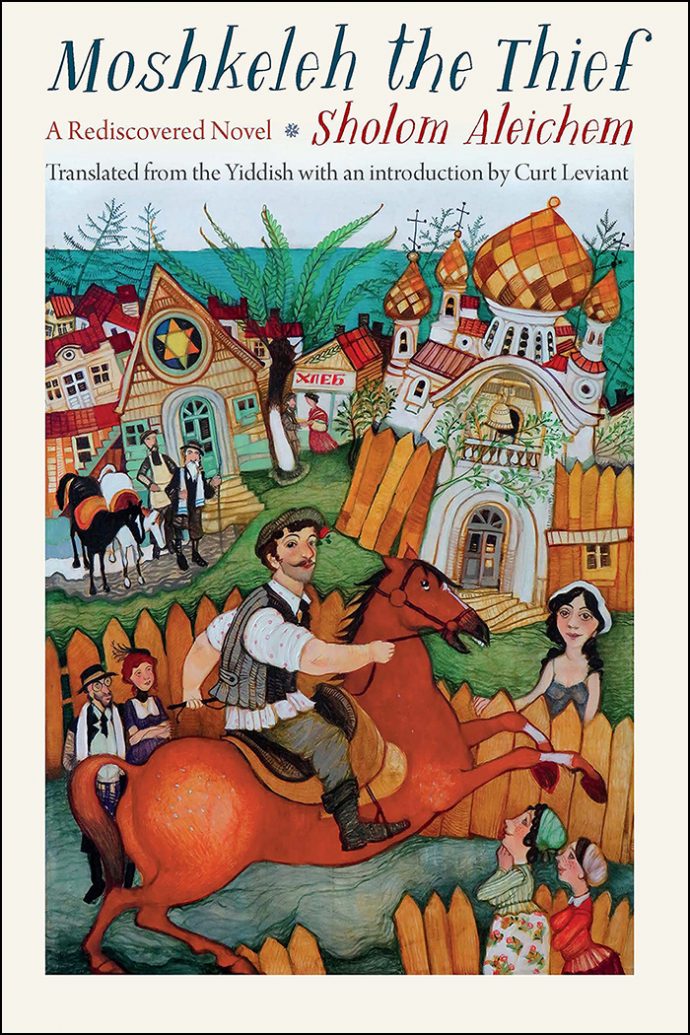 I recently received a copy of Moshkeleh the Thief, a beautifully designed little book of “a rediscovered novel” by the Yiddish author Sholom Aleichem, translated into English by Curt Leviant. For Jewish readers with an interest in Yiddish literature, having Sholom Aleichem’s name associated with a new story is like uncovering a painting with Rembrandt’s signature on it. In fact, in this day and age, if a new translation from the Yiddish doesn’t have Sholom Aleichem’s name attached to it, it probably wasn’t distributed by a major publisher. And this little book has two major publishers behind it, the esteemed Jewish Publication Society and its partner, the University of Nebraska Press.

Now in the interest of full disclosure, the translator, Curt Leviant, has been a mentor and friend for many years. It began about fifteen years ago when I called him about translating a Jacob Dinezon novel into English.

Looking back on it now, I’m surprised at my chutzpah in asking the translator of such renowned Yiddish authors as Sholom Aleichem, Isaac Bashevis Singer, and Chaim Grade to take on an assignment from our fledgling little independent press. But we had just received positive reviews from some important Jewish publications for our first effort, Dinezon’s Memories and Scenes, and, feeling emboldened, I made the call.

When he answered the telephone, I said, “Professor Leviant?”

And his first words in reply were, “Who calls me Professor Leviant? Call me Curt.”

Trying to conceal my nervousness, I explained that we had recently published a collection of Jacob Dinezon’s short stories and were now looking for an English translator to take on a Dinezon novel.

“Dinezon?” he asked. But before I could say another word, he said, “Wait a minute.”

I heard the phone clunk, footsteps heading away, footsteps returning, pages turning in a book, and then, “One, two, three .  .  . twelve columns!” Curt Leviant had just looked up Jacob Dinezon in a Yiddish biographical dictionary, counted the columns devoted to his life and career, and was impressed by what he found.

Although in the end, Curt declined my offer to translate the novel—informing me he was turning his full-time attention to the writing of his own works of fiction (fiction that has received a good deal of acclaim)—he did thank me for introducing him to this forgotten Yiddish author. Over the years, Curt kept the door open by providing publishing advice, answers to questions about translating Yiddish to English, and generously reviewing some of our books in Jewish magazines and newspapers.

So receiving a new translation by Curt Leviant right before Rosh Hashanah was like receiving a holiday gift. And true to form, this translation of Moshkeleh the Thief is marvelous. The writing is nuanced, vivid, and a pleasure to read.

The basic plot is simple: a Jewish horse thief (Moshkeleh) sets off to rescue the pious but wayward daughter of a Jewish wine merchant (Tsireleh) who has been seduced and runs off with the town’s Gentile liquor tax collector (Maxim Tchubinski). Originally published in twenty installments in a Yiddish newspaper in 1903, the story reveals the characters and conflicts in twists and turns that take us on detours that almost completely lose us by the end of the novel. Whether or not Sholom Aleichem realized this when he wrote it, by the end of chapter eighteen, he implores the reader, “Please read on.”

Which we fortunately did, so we could learn Moshkeleh and Tsireleh’s fate. But to my surprise, the ending was less Sholom Aleichem and more Jacob Dinezon. No, there wasn’t enough pathos to elicit tears, but there was certainly no humor either.

And what really surprised me was that our final glimpse of Moshkeleh closely resembles the final scene in Jacob Dinezon’s Hershele, in which the main character is led away in a prisoner convoy.

And that made me wonder. All right, I admit some would say I’m a little too obsessed with Jacob Dinezon, but 1903 was the year that Dinezon celebrated his writer’s Jubilee—his 25th anniversary as an author. The critic Bal-Makhshoves (Israel Isidor Elyashev) published a retrospective in the Yiddish newspaper Der fraynd (The Friend) and Dinezon’s closest friend, I. L. Peretz, wrote a tribute which included this line: “And to this very day, the reader cannot be calm not knowing what truly became of the beautifully-voiced and beloved Hershele who was driven by convoy from the town to who knows where, and whether he still lives, and if so—how?”

Sholom Aleichem and Jacob Dinezon were also great friends, and both were enjoying enormous success serializing their novels in the Yiddish newspaper Der fraynd. Is it possible that our final glimpse of Moshkeleh being led away in a police convoy is, in fact, a wink to Jacob Dinezon in honor of his Jubilee?

Now, as I said at the outset, this book is beautifully designed. The cover is strikingly colorful, the text is attractively laid out, and the translation is delightful. But as finely put together as this little volume is, one wonders how a bookseller can charge $19.95 for barely 80 pages?

Which reminds me of another Dinezon story from his short story collection Memories and Scenes translated into English by Tina Lunson. While temporarily living in Moscow, Dinezon discovers that after a long delay, his first novel, The Dark Young Man, has finally been published and is receiving rave reviews. However, because he is reluctant to let his family and friends know that he is the author, Dinezon sets out to obtain a copy for himself from a clandestine book dealer.

Yes, the dealer tells him, he has the book, but it will cost three rubles. Dinezon asks, “How does a Jew have the heart to charge three rubles for one book, and a Yiddish book at that?”

The dealer replies, “Do you have any idea what kind of book this is?  .  .  . I only have five left, and I have sent letters all over to get even twenty-five more. And in Vilna, they are already out.”

Of course, Dinezon pays the three rubles and heads home to, as he writes, “get to know my own child.”

As for Moshkeleh the Thief, I’ll let you decide how many rubles it’s worth to you.

Moshkeleh the Thief
By Sholom Aleichem
Translated from the Yiddish with an introduction by Curt Leviant
Available from Amazon.com