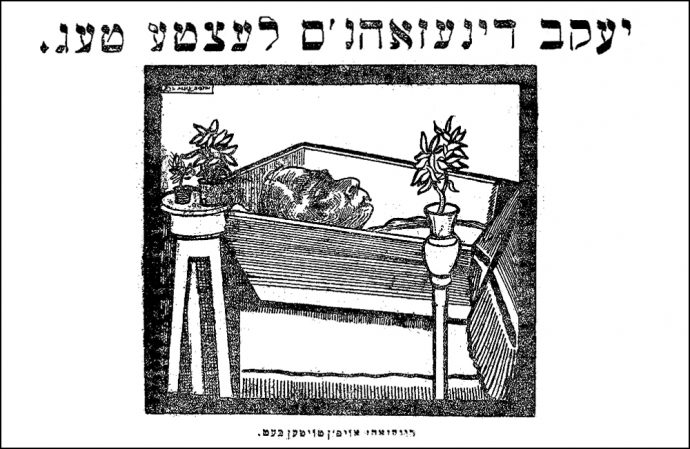 Today, August 29, 2021, marks the 102nd anniversary of the death of the Jewish author Jacob Dinezon. We commemorate this day with the following quotations gleaned from newspaper obituaries and tributes published in Warsaw and Bialystok and across the ocean in New York City in the days immediately following Dinezon’s death in 1919. These first-time English translations by Mindy Liberman, translator of Dinezon’s novel Falik and His House, offer a poignant and powerful reminder of Jacob Dinezon’s role in the development of modern Yiddish literature and his love, commitment, and devotion to the care and education of Jewish children.

“Friday the 3rd of Elul (August 29) at 5 p.m. in Warsaw, Jacob Dinezon, n”e (his soul is in Paradise) passed away at age 68. With the deceased, Yiddish literature lost one of the oldest and best-loved writers. Together with all of his admirers, we stand in deep sorrow bowed before the fresh grave.” —Moment Editorial Board

“With great grief and sadness we make this announcement about the death of the very esteemed Jacob Dinezon, n”e, the beloved Yiddish folk-writer and dedicated educator of Jewish children. The deceased dedicated not only his pen, but also, day in and day out, his work, his energy, and his effort to the education of Jewish children. . . . The Jewish people will never forget him for this.” —Joint Distribution Committee, Boris. D. Bogen, Director

With a broken heart I accompany to his eternal rest my dear brother and friend Jacob Dinezon —S. An-ski (Yiddish author, poet, and playwright)

With Jacob Dinezon’s death, Peretz has died for me again. —Helena Peretz (I. L. Peretz’s widow)

“Jacob Dinezon has died! One of the fortunate who made themselves immortal in the history of our literature; one of those whose name resounds in the Jewish street with love and warm gratitude. . . .

“Dinezon was the only one who came close to the heart of the people, to the softest strings of the soul, and if Mendele and Peretz essentially wrote for scholars and the learned, Dinezon was in fact read by everyone, by all of the Jewish masses. Even our grandmothers shed tears over the pages of Dinezon’s works, and it isn’t an exaggeration to say that several generations were brought up with his works. . . .

“With the death of Jacob Dinezon, we have lost one of the most loved and esteemed figures in Yiddish literature, one of the most visible and warmest leaders in the realm of Jewish school organization, and a dear person who leaves behind many devoted friends on this and the other side of the ocean.

May the earth rest lightly on him.”

“Dinezon the writer has ruled our hearts for over 40 years. Together with the leaders of our young literature, Mendele, Peretz, Sholem Aleichem, and others, he created the folksy Jewish characters that are buried so deeply in our memory. Together with them, he developed the spiritual nourishment of the Haskalah. In his youth, he experienced the inner revolution that placed him in the ranks of the people as he laid brick upon brick upon the new building of Yiddish folk-literature to finally stand on the summit of the great literary school created in the last few years as a leader and guide, as a friend and comforter, as a supporter and helper—as a central figure!

“But Dinezon the human being swallowed up Dinezon the writer. Whoever looked into his good, smiling eyes, whoever saw his pleasant face, whoever was alert to his kind love and self-sacrificing devotion to the abandoned Jewish child, his motherly goodwill towards numerous lonely Jewish writers and literati, his fatherly and teacher-like concern for young writers who had lost their way, his constant intercession and involvement in all of the best Yiddish literary endeavors—that person would have to feel that Dinezon was the sole solid pillar for our best cultural creations; that Dinezon was the greatest and best person in the entire Yiddish literary family. . . .

“The sad news has just arrived that the father of the realistic Yiddish novel, the beloved Yiddish writer and community leader Jacob Dinezon, died yesterday at the age of 63.

“A huge Jewish heart has stopped beating. A rare Jewish soul has left this world and will be lamented and mourned by the whole Jewish people.

“During the last few years, during the sad war years, Dinezon laid his pen aside and took up community affairs. He undertook to save the Jewish war orphans, and his work was extensive and important, his accomplishments distinguished.

“Dinezon took the Jewish war orphans under his protection and cared for them like a father. He founded schools for them, established free kitchens, and did everything possible for them as if he was their own father.

“Dinezon was well-loved in Yiddish literary circles in Warsaw. The young writers related to him like to a close relative, like a dear and kind brother. . . .

“The author was above all a moralist and a critic of manners: his main goal was to instruct ordinary readers, awaken in them good feelings, love and compassion for the weak, and respect for a loving heart.”

“I have expected this every day. After Peretz’s death the old man took it upon his old shoulders to care for the small orphans that Peretz had left in the schools. How long can a human heart hold out? The news struck me like thunder, even in this time when we are becoming accustomed to everything. For me, it was not the beloved Yiddish folk writer who died; for me, it was not a great Jewish heart that stopped beating; for me, it was not the father of hundreds and thousands of little orphans from the streets of Warsaw who passed away. For me, first and foremost, a friend had died, perhaps the only one I had. A father, an educator, and a caregiver. And the death relates to me so personally right now that I do not know how to express what Dinezon was for us, the writers of Warsaw, for [Avrom] Reyzen and for me.”